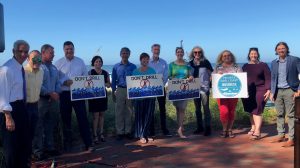 Today the Florida Gulf Coast Business Coalition (FGCBC) hosted a press conference to announce its launch with a membership representing more than 2,000 businesses committed to protecting Florida’s Gulf Coast from the expansion of offshore drilling. The event included business leaders and elected officials all committed to preventing offshore drilling in the Eastern Gulf of Mexico. Video of the press conference can be seen here.

Hunter Miller, Oceana’s Southwest Florida Campaign Organizer, kicked off the event and highlighted FGCBC’s commitment to preventing the expansion of offshore drilling. Robin Miller, CEO of the Tampa Bay Beaches Chamber and Chair of the FGCBC, followed Hunter Miller and discussed the coalition’s opposition to offshore drilling. Robin Miller advocated that we “stop our motion of drilling in our Gulf Coast and protect, not only our coastline, but our businesses that rely on the economy that tourism brings to our destination.” She went on to introduce the other speakers:  Congressman Charlie Crist, Keith Overton (President of TradeWinds Island Resorts) David Yates (CEO of the Clearwater Marine Aquarium), and State Senator, Jeff Brandes.